Planning to launch your own React Native video editor app, but wonder what features, filters, and libraries to adopt?

React Native is a powerful framework to create stunning iOS and Android applications like Facebook, Skype, Airbnb, Uber Eats, and Instagram. However, many brands utilize RN to create never-seen-before video chatting, conferencing, and live streaming app experiences due to its time- and cost-efficiency.

If this resonates with your current use case, this post will guide you through the top-notch features, filters, and libraries you can leverage to create avant-garde React Native video call and editor applications.

There’s more than one reason why mobile developers praise React Native. Its ability for cross-platform development, over-the-air updates, and the native feel of apps are just some of them. And because it allows the creation of unique mobile solutions quickly, React Native has become the top cross-platform framework in only a couple of years.

But the best thing about React Native is that you can build any kind of mobile app with it, including video apps. Let's take a look at their main features and types.

Though videos have been booming long before the pandemic, the lockdown has unlocked the full potential of video platforms. This isn’t surprising: video apps allow us to have fun, meet loved ones, boost personal brands, work, study, and even see doctors.

As app providers are trying to meet this demand, new video apps keep mushrooming. And React Native lets you implement all this diversity.

Video calling apps made social distancing bearable. Their main features are a contact list, one-to-one and group video calls, text messaging, and screen sharing. This is what an average user needs to connect with other people. As for React Native video calling app examples, Facebook Messenger, Skype (till 2020), and Bunch are the most prominent ones.

Aside from apps for everyday communication, you can also find some decent solutions for business use, such as Zoom and Google Meet. These offer a broader spectrum of features and allow for larger people groups. On top of that, there are React Native niche-specific solutions for teaching and studying, corporate meetings, healthcare, and beyond.

Video editing apps in React Native allow users to modify and rearrange video shots while enhancing them with filters, visual effects, and sounds to create a new product. Mobile React Native video editors vary based on their specializations, from Filmmaker Pro or KineMaster for professional-grade editing to Quik designed for creating “Instagram-friendly” fun, short videos.

The latter ones are particularly popular, with TikTok being the fastest-growing social media platform. By adding video features like TikTok, you empower users to create entertaining content in a few taps, thanks to features like beautification, video effects, color filters, and AR masks.

Besides, with modern mobile React Native video editing apps, users can capture videos, so you don’t have to upload anything before editing. Some even go further and offer sharing capabilities, enabling their users to show off their talent and build personal brands.

React Native video streaming apps allow users to watch videos over the web without downloading them. They are typically extensive libraries of TV shows and movies available on a subscription basis. The basic functions include playing, browsing, and sharing videos using integrations with social networks, downloading them to watch offline, and creating video playlists.

Netflix is a shining example of a video streaming platform. Based on traffic volume, it remains the leader in the global video streaming market, followed by Apple TV, Hulu, and CBC. 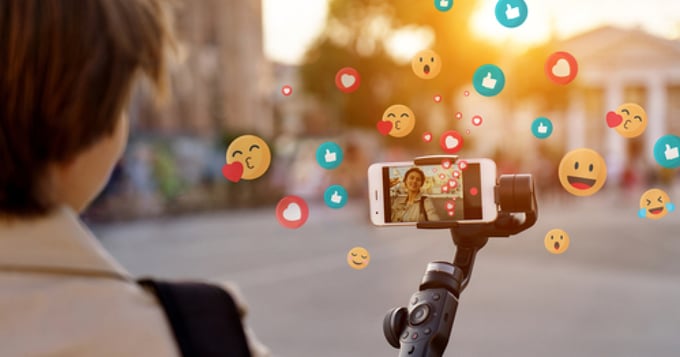 Also known as React Native video hosting platforms, these are technically streaming apps that allow users to browse and watch existing videos, and upload and share their own ones. With the number of active users equivalent to a quarter of the global population, YouTube remains the most popular video-sharing service and video platform in general. It offers the largest catalog of videos available you can watch non-stop.

Given the popularity of video content, today’s mobile development market is brimming with tools for building video apps of any type. That’s why, if you’re not a tech enthusiast willing to code everything from the ground up, the first thing you should do is find an SDK.

And that’s where the eternal “open source vs. proprietary” dilemma comes into play. How should you approach it in the case of React Native development? Let’s find out.

A commercial SDK legally belongs to those who built it and is available only after buying the license.

These benefits are hard to beat. Still, the main caveat is that proprietary SDKs are paid solutions, and this fact keeps some app owners from choosing them over open source options. However, the price pays off in the long run. A proprietary React Native SDK lets you save a bunch of time and effort on feature development, effect design, and device compatibility testing.

Still, if you don’t need all those advanced features offered by commercial devkit, consider choosing from open source offerings.

In their attempts to minimize expenses, many developers prefer going with open source options. And this makes sense due to the particular benefits of such devkits:

Still, open-source SDKs are not all roses. After all, where is the dilemma we mentioned earlier coming from? Indeed, non-proprietary solutions have some limitations, including:

With all these disadvantages taken into account, open-source React Native SDKs can be an option for simple apps with basic features. However, if your case is different, go with commercial alternatives.

As you can see, a decent SDK can spare you weeks and months of coding. But with so many video editing libraries on GitHub, how can you find a suitable option? Here’s what we recommend.

First of all, define the type of your app and make a list of features. Keep in mind there’s a huge number of subsets within each app variety.

Say, you’re building a React Native video calling app. Is it going to be a simple solution for informal communication like Viber or a video conferencing platform for corporate use? Or is it a telehealth tool? Answering these questions will help you decide on the features easier.

As you have the feature scope, it’s time to explore the available React Native tools and use cases for your app.

When it comes to tools for building React Native video conferencing apps, the market is less generous. That’s why we recommend you consider the proprietary segment. For example, our partner Agora provides an SDK for creating unmatched video communication experiences super-fast. It comes with the React Native wrapper and three main components:

All these features are fully compatible with our Face AR SDK. You can build video communication solutions with real-time engagement features like face filters, virtual backgrounds, and AR makeup.

Speaking of React Native video apps, our Video Editing SDK is an excellent toolkit for developers. It lets you integrate all the necessary features for creating and sharing fabulous short- or long-form videos, animated clips, and stories.

Visual and color transformation effects, audio editing, overlays, and other advanced features are included. Besides, it integrates with the Face AR module that powers your React Native video app with Snapchat-like filters, animated backgrounds, and beautification.

All this diversity of features comes with React Native wrappers, meaning that it’ll take you a couple of code lines to integrate the necessary functionality. This considerably accelerates the development process.

Overall, if you’re building a React Native video player project, you’re in luck — the market is full of open source solutions for developers. However, most of these offerings are very basic. So, if you want to implement, say, a recommendation engine like the one offered by Netflix, you’ll need to go with additional solutions or consider React Native proprietary packages.

Given React Native’s unique capabilities to shorten app production cycles, the variety of devkits on the market, and the buzz around video platforms, React Native video app lets you meet user needs without going the extra mile. And hopefully, this article has given you a clear idea of what you’re going to build and how.