Photo editing apps for iOS and Android are ubiquitous.

People want to share their best pictures so improving them before sharing is par for the course.

As the market for photo imaging software is expected to grow, more companies join it.

If you are among them, this article will help you learn about the market conditions, top competitors, core features to include in an MVP, and how to use a photo editor SDK to save time and money.

The global market for photo editing Android, iOS, and desktop apps together is reported to be around $300M. This includes both simple consumer tools (e.g. Google Snapseed) and more complex professional software (e.g. Adobe Photoshop).

However, depending on the methodology, it could actually be much bigger.

Firstly, this doesn’t include social media with inbuilt photo editing functionality. If we add platforms like Instagram and Reddit, the market increases by a large percentage.

Secondly, this stat doesn’t include software that can work with both photos and videos. InShot is one such example.

As a result, the actual numbers can be much higher, which makes the niche more attractive for newcomers.

How to Make a Photo Editing App for Android and iOS

So, the market conditions are favorable, and you have an idea for the app. This is what you should do next.

This is the stage where you need to decide on your target audience and the message your app sends. Both of these things are important for your promotion efforts, app design, feature selection, and other aspects of your prospective iOS/Android photo editor app.

For example, an app focused on casual users that want Instagram-friendly pics will have a different positioning from mobile editing pros.

There are four main avenues that photo editing tools can take to earn:

These models can be used together. Ad-supported apps that remove ads for premium users and allow them in-app purchases are very common across all domains.

The exact monetization model largely depends on the kind of photo editor you want to build and your target audience.

Want to get your app to market and start earning faster? Use a photo editing SDK from Banuba.

Whether to build the app yourself or hire a contractor depends on the conditions you are in.

The in-house approach is advisable when:

The first item on the list is usually the problem, as finding a qualified mobile developer, let alone an entire team, is a lengthy and expensive process - expect over 4.000 USD and at least 36 days to get a new dev, assuming you can beat the offer from larger companies and other startups.

Not to mention that the people will also require payment later down the line. But if you already have a team, there is nothing stopping you.

Hiring a software development company (or a freelance team) is for the following cases:

An offshore development company would cost way less than an in-house team. In addition, a sizeable business would be able to put such a team together on short notice and start working quickly.

Although, it might take some work to find the contractor that would be the right fit for your project.

You can also combine the two.

For example, if you have a team that can build a photo editing app for Android but not iOS, you can contract someone to fill the gaps.

You need to decide whether you want to develop the photo editing functionality from scratch or integrate it using an image editor SDK - a premade module that can perform the necessary functions.

This is what the DIY option has going for it:

However, there are drawbacks as well:

SDKs have the following advantages:

The main disadvantage of this approach is that the license payments will add up over time and the long-term cost of using an SDK is higher than building a system from scratch.

This is a viable option even if you use cross-platform frameworks.

You can also integrate an iOS/Android photo effects library that is open-source. While most of them are free, they carry hidden costs as you will need to adapt them to your project.

4.1 Developing an App with a Photo Editor SDK: Android

Explaining how to create such an app from scratch would take actually writing it. However, we can show how it’s done with an SDK because it’s a rather straightforward process.

We will use Banuba Face AR SDK as an example because it has photo editing capabilities (e.g. effects and slideshow) and supports native mobile development technologies, as well as web and desktop - if you decide to expand later.

To get the latest version of the SDK, just send us a message. There is a free trial, so you’ll be able to test it before committing to anything. This is the first step on any platform.

A powerful photo editing SDK will save you a lot of time and money and will help you launch your product faster. Request a free trial and see it for yourself.

These requirements also fit the Android version of cross-platform apps.

Once you have the SDK, follow the detailed integration instructions on our GitHub page.

4.2 Developing an App with a Photo Editor SDK: iOS

The iOS version has the following requirements:

See the GitHub page with an integration guide and code samples to quickly marry the SDK to your project.

Beautification from Banuba works in real-time and in post-processing

5. Select MVP Features and Develop Them

This can be done either before or after choosing the development approach. In the latter case, you will likely get help from your vendor.

MVP stands for “Minimum Viable Product”. It is a version of your photo editing app that contains the core features plus something that makes it stand out from the competition (that’s where positioning comes in).

This approach has become popular among startuppers because it allows them to release functioning products while risking the minimum amount of money.

If things don’t go as planned (market conditions change, the competition turns out too strong, etc.) you won’t lose as much with an MVP as you would with a more expansive product.

There are several ways you can select your features.

One is weighted scoring. First, you choose criteria (importance for users, profitability, complexity, etc.). Then you assign each feature a score based on these criteria. The ones with the most points get into the MVP, the rest can wait.

Another, somewhat simpler approach, is the value vs complexity quadrant. It begins with drawing a standard coordinate chart with one axis representing how much will a feature add to your photo editing app, and another showing the effort it would take to build it.

You will end up with four blocks: 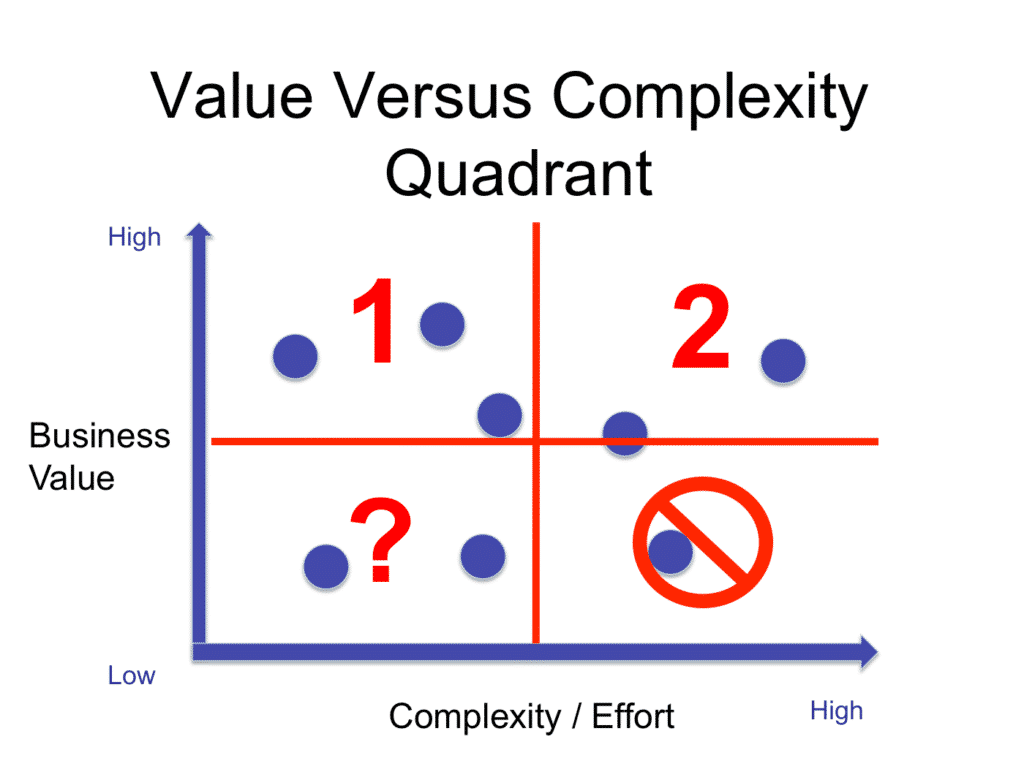 This is what you can implement:

This is the stage to design layouts, interface, and user flow, as well as create a few prototypes and see how they work. In many cases, what you imagine in theory doesn’t work like this in practice.

That’s why prototypes are so helpful - they cost a tiny fraction of the overall development budget yet allow you to get a feel of how the app runs.

In addition, using them helps bring out potential hurdles that you could’ve overlooked.

You can’t prototype everything. The actual photo editing interactions are too complicated for that. So are the performance characteristics (e.g. the app speed and the battery drain).

So before going to market with your photo editing app, it is advisable to run user acceptance testing (UAT). This is done by using a representative group of people from your target audience.

Give them an opportunity to try your app in real-life conditions. If the feedback is positive - great. If it isn’t, you now know what to fix.

When the app is ready, it’s time to release it in stores and start the promotion efforts.

You know how to make the best photo editor, so you do everything right and your app becomes a success.

But the work is not done. The competitors won’t sit idly by and watch you grow.

You will need to add new features, keep the existing ones updated, squash bugs, and improve your app further.

There are a lot of solid options if you want to get packaged photo editing features. Here are the top 5 SDKs you can use.

Banuba’s flagship product is a powerful iOS/Android photo effects library. It was made by a company with focus on AR and it shows.

The company’s asset store also contains many premade effects that can be licensed.

It is available for a free trial, just send a message to get it.

Banuba Face AR SDK is known for its impressive effects. Get them in your app.

Img.ly is a venerable SDK from masters of their craft. It has a lot of editing features optimized for smartphone screens. It allows a lot of customization and can be integrated with native Android and iOS apps, as well as Flutter, React Native, Cordova, and Ionic.

Img.ly has traction in eCommerce, social media, and marketing industries.

DS Photo Editor is easy to integrate and easy to use. Although its feature set is relatively small, it still has many photo editing options: cropping, vignettes, LUTs, overlays, etc. This SDK is completely free to use.

Pixelixe is built upon HTML5. It is well-suited for web applications, although mobile web apps can also use it. Pixelixe can crop, resize, add captions, blur, and do many other things.

Besides working with photos, it also processes PDFs. And the developers would appreciate its API that makes the SDK more convenient to operate.

For quick photo editing app development there are few SDKs as good as Banuba’s. Here’s why:

The mobile photo editing app market is big and growing, so the conditions for the new companies are favorable.

Yes, the competition is strong.

But with the right positioning, a solid MVP, and a cost-effective development (using a photo editor SDK) you can achieve success. And if you need help with your photo editing capabilities, let us know.

How do I make my own photo editing app?

To make your own photo editing app start with conceptualization: who will it target and what scope of problems will it solve. Then choose the monetization model, a development strategy (in-house or with outside help), select the approach to photo editing features development (DIY or with an SDK), choose the feature set for the minimum viable product, prototype the project, test it, and launch your app.

How do you add effects to photos on Android?

The simplest option to add effects to photos on Android would be to integrate a premade photo-editing SDK, e.g. Banuba Face AR SDK. It could be done in a few hours - under a week at most. Then it is just a matter of selecting the effect you want, the software will apply it automatically.

How do I integrate a photo editor into my website?

To integrate a photo editor into your website, first, send us a message to get the latest version of the SDK. Then follow the instructions - it takes just a couple of lines of code.