For an augmented reality SDK, a rendering engine is like, well, an engine for a car. It powers all the visual effects and lets the technology work smoothly on different platforms. So imagine someone removing the motor from a Ferrari and replacing it with an even better one.

We have released Scene - the new version of our rendering engine. Besides being on another level architecturally, it brings a host of benefits that will be apparent to both the developers and users alike. 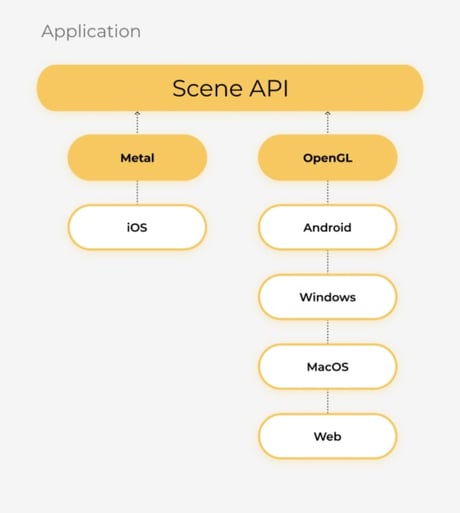 Firstly, it improves the effectiveness of other technologies included in Banuba Face AR SDK.

Secondly, it supports Metal and WebGL 1.0, which means the AR effects will work on iPhones and Macs even when Apple eventually stops supporting OpenGL.

Finally, it allows applying different effects to different faces on the screen. Now if you have several people on video or photo, each of them can wear a unique AR mask or have special beauty AR effects applied to them.

The full benefits of Scene will come into play once we release our new web studio for making AR effects, so stay tuned!

The importance of Web AR

Web AR is invaluable for videoconferencing, dating, social media, and any other applications that use video calls. This is why we continue expanding our capabilities with this technology and keep it at the forefront of our development efforts.

Web AR offers unparalleled accessibility and ease of use on both the user and developer sides.

Firstly, it doesn’t need any software or hardware other than a webcam and browser. People can use it as easily, as they surf the Internet daily.

Secondly, it is very conducive to privacy. Banuba’s Web AR technology doesn’t ask for any extra permissions, nor does it transmit or store private information. Everything remains on the user’s device.

Thirdly, it doesn’t require any downloads. All the work is done on the developer’s side, so businesses don’t have to overcome the innate resistance of their customers to download any extra applications.

Finally, developers will find it much easier to use than creating an AR-enabled application. You only need to connect the Web AR face tracking library and implement the content component.

Now that we have explained the importance of Web AR, let’s get to the specific features.

Now the users of web applications with integrated Banuba Face AR SDK will be able to use the cool moving video effects. This is all thanks to the support for video textures added to its latest version. This feature was one of the most popular ones on the mobile versions of our Web AR SDK and has become accessible to Web AR users as well.

Developers will appreciate the ability to work with nn_api. With it, they can access various features for AR in web browsers made possible by the Web AR SDK: segmentation of lips, hair, eyes, and background. It also allows replacing the background with an image or a video file.  This feature decreases the time spent on working with SDK, which will allow you to release your products faster.

Now the lip segmentation and recoloring are possible on Apple’s browser. This means integrating this functionality into your web app gives you access to millions of iOS, iMac, and Macbook users. Feel free to include this feature in virtual makeup try-on or entertainment applications.

Web AR: API to set the number of faces to track

A useful little feature for the developers. Now they will be able to limit the number of faces that the neural networks can track on the screen. This can be used to fine-tune the SDK’s performance for the specific application.