With 9 out of 10 people watching videos on their smartphones, production of mobile audiovisual content remains an attractive niche. When it comes to the video editing apps, there already are many players on the market, from giants like Adobe or GoPro to small studios and startups. In this article, we will explain to you how to develop and launch your own competing application quickly and cost-effectively. 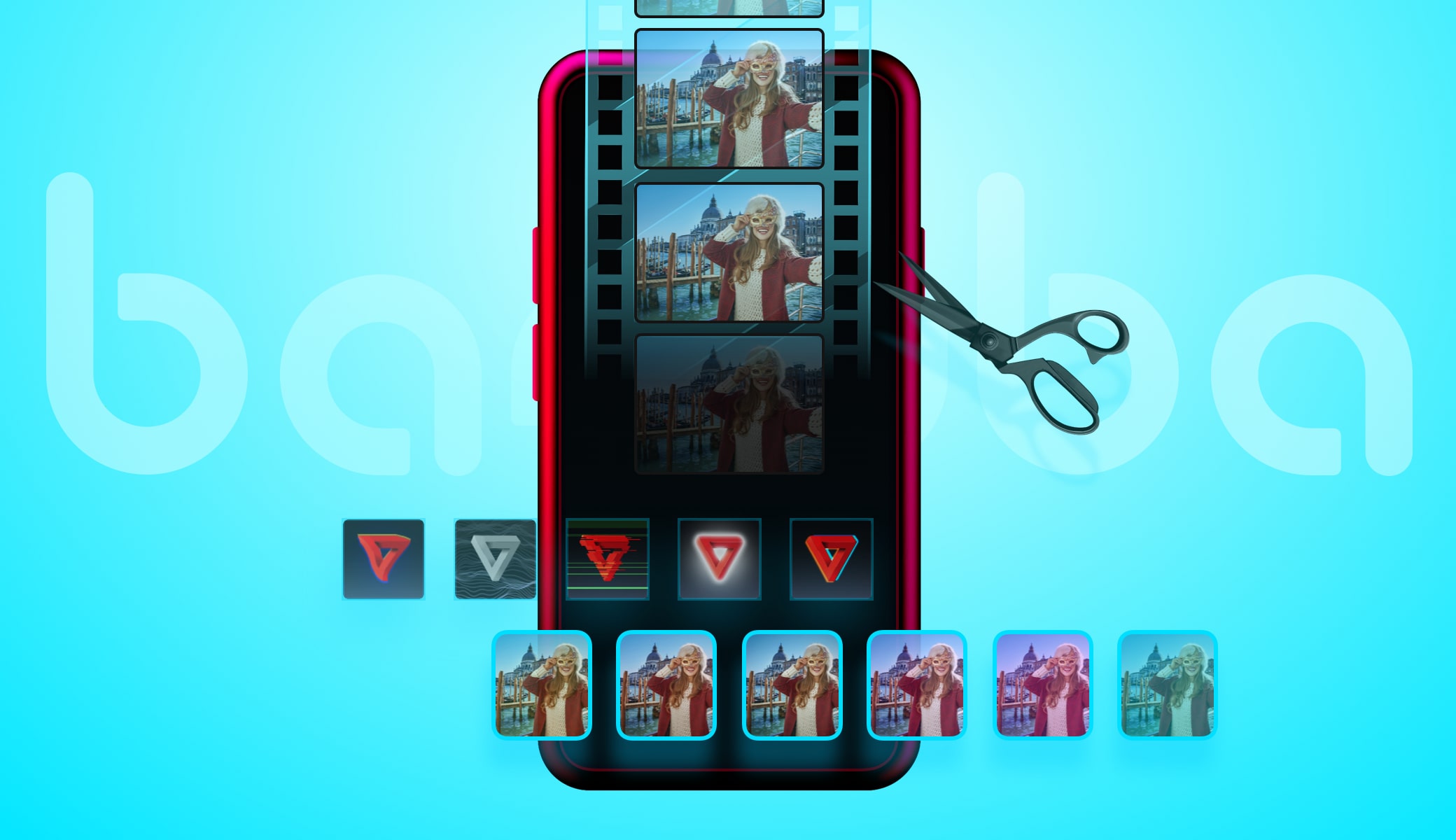 Even within a relatively tight niche like mobile video editors there are still specializations. For example, Quik is optimized for people who just want to create fun videos fast. Kinemaster, on the other hand, targets users who need more in-depth editing capabilities. Even though both apps solve the same problems, they do so in different ways, more appropriate for different people.

At this stage, you need to define the following:

Note that this is an iterative process. The plan on how to make your video editing app stand out could change because of shifting circumstances or misunderstanding the target audience.

The goal of a business is to make money. So it is crucial to think this through before getting down to the development stage.

This is how you can make your mobile video editing app bring profit:

Depending on the feature set, there could be other monetization options you could explore. For example, if you integrate an AR effects SDK into your video editor, you can sell various effects (masks, backgrounds, etc.) to users or businesses.

In this case, we mean deciding whether you should build your app in-house, outsource it, hire a bunch of freelancers, or combine  these options.

If you have a solid mobile development team, you already know how to build the video editing app with it.

This is what goes in favor of such approach:

And this is what goes against it:

If you don’t have a team, you might turn to a company that would develop your video editor for a price.

There are differences between custom software vendors in your country and abroad. The former would be culturally close to you but likely to cost way more: they have to pay their developers as much as you would your in-house people and add a markup to make a profit.

However, the businesses in the West more often outsource their development to offshore companies. In times of a pandemic everyone is working remotely, so the geographical distance plays a less important role now.

These are the benefits of outsourcing:

There are drawbacks to this approach as well:

Finding a reliable vendor is a topic that requires its own article. To start, though, check out company listings on independent review websites like Clutch. The platform verifies each testimonial, so the number of fake ones would be minuscule.

Putting together a freelance team is also an option. Through websites like Upwork, you can probably find enough qualified people to handle the development of your video filter editor.

Note that working with an agency/company through a freelance platform is closer to working with an outsourcing vendor. This block describes the benefits and drawbacks of putting together a team of unaffiliated freelancers.

This is what this method has going for it:

But of course there are disadvantages:

This approach helps you cover the gaps in your own team.

Suppose, you have a crew of rockstar mobile developers who don’t have much experience with augmented reality. So you hire some offshore specialists that know how to make filters and effects for your video editing app.

The benefits and drawbacks of this method are the same as with the previous three - for an in-house, freelance, and outsourced teams, respectively.

The first part of this step is choosing whether to release your video editing app on Android, iOS, or both. Note, that if you want to cover both major mobile platforms, you don’t have to launch two versions simultaneously. However, you should plan ahead, as this choice matters in selecting the tech stack.

There are reasons to start with one platform over the other. iOS users typically spend more while Android has a much higher market share. This is because Apple focuses mostly on higher-end devices, while the open source Android can be found in low-to-mid tier smartphones, as well as expensive devices (e.g. Samsung Galaxy series). 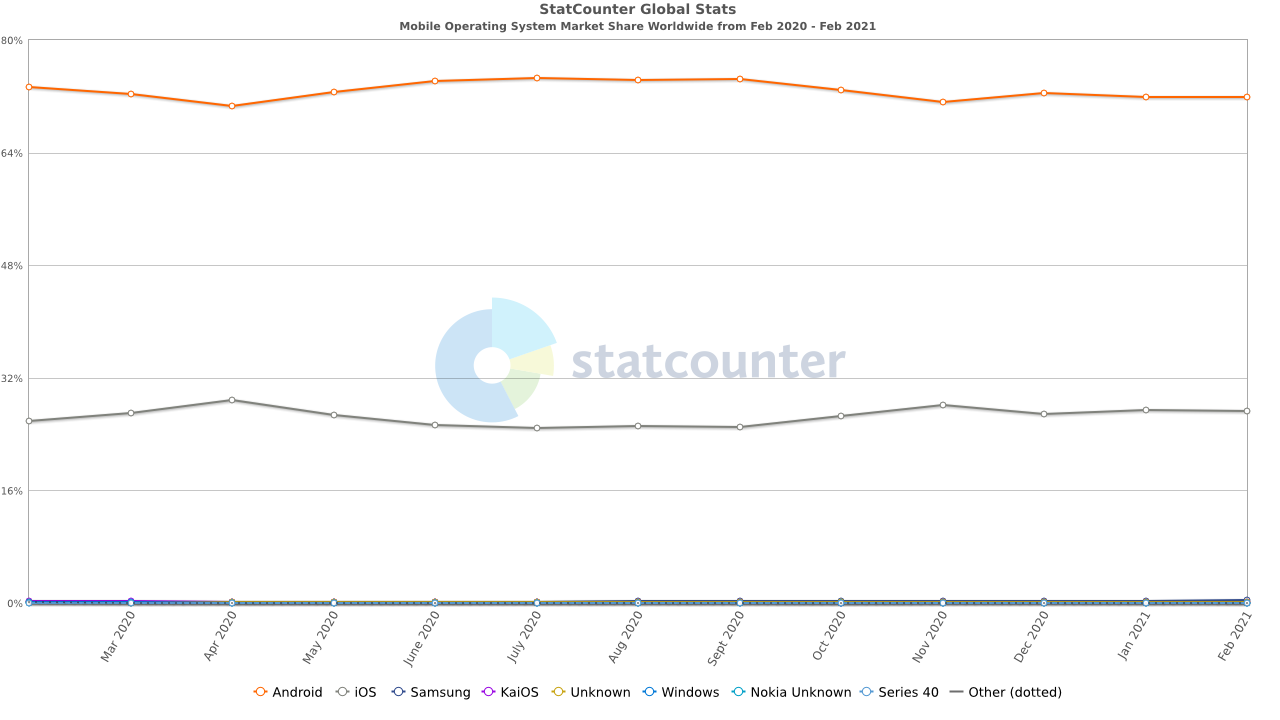 There are two major ways to approach the development of any mobile app (yes, including video editors).

In this case, “native technologies” mean programming languages with their ecosystems that the owners promote for use on their respective platforms. For Android these would be Java and Kotlin. For iOS - Swift and Objective C, the latter being phased out.

There is one main drawback to this approach:

There are two main kinds of hybrid apps: “native cross-platform” (built with React Native, Xamarin, Flutter) and “mobile web” (built with Ionic, PhoneGap, Cordova, etc.). The latter are basically websites pretending to be mobile apps, which makes the underlying frameworks unfit for developing video editing applications. So in this section we will focus on the “native cross-platform” technologies.

The three leading frameworks for the “native cross-platform” development are React Native, Xamarin, and Flutter. 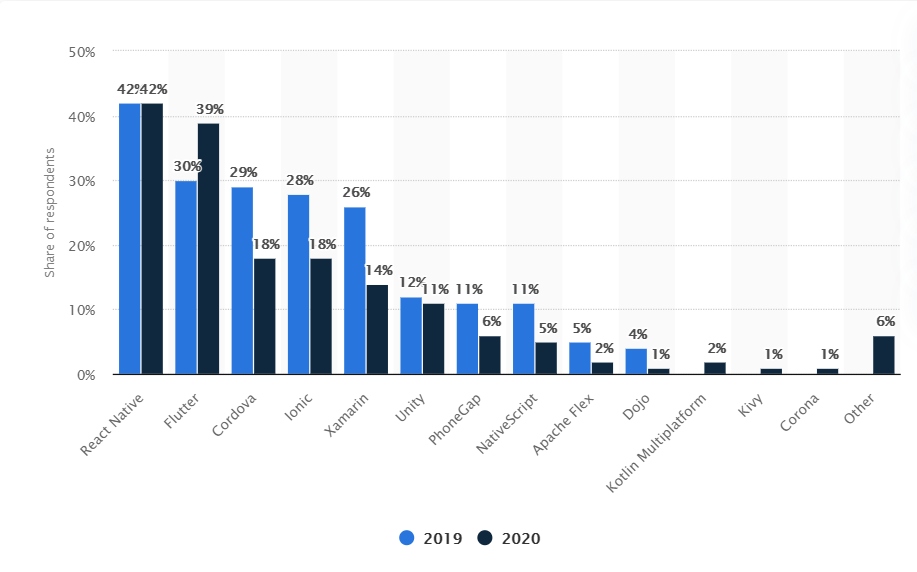 This is what they have going for them:

But it’s not all sunshine and rainbows:

To decrease the time-to-market, you can use a premade SDK containing the features you need. This can include the core ones (e.g. trimming and audio editing) as well as more advanced functionality. For example, Banuba Video Editor SDK can enable AR face filters, background video effects, LUTs, text and GIF overlays, etc.

It also has a free trial option, feel free to check it out.

Which one is the best, largely depends on your concept.

To mitigate risks and release your mobile video editor ASAP, you would do well to start with a Minimum Viable Product (MVP). This basically means that you launch an app only with the features that solve the users’ problem and distinguish you from the competition.

Firstly, this helps you release your product faster. The fewer features you have, the quicker they are to build.

Secondly, this saves you money. There is always a risk of failure, so if you invest less you won’t lose as much if the things go awry.

The problem is, how to choose the features that should go into the first version of your app?

There are several approaches to solving it, mostly coming down to measuring the value that the feature brings (in the form of user satisfaction, for example) against the expenses it takes to release this feature.

For example, the “value vs complexity” quadrant lets you grade each functionality along the axes of business value and effort. 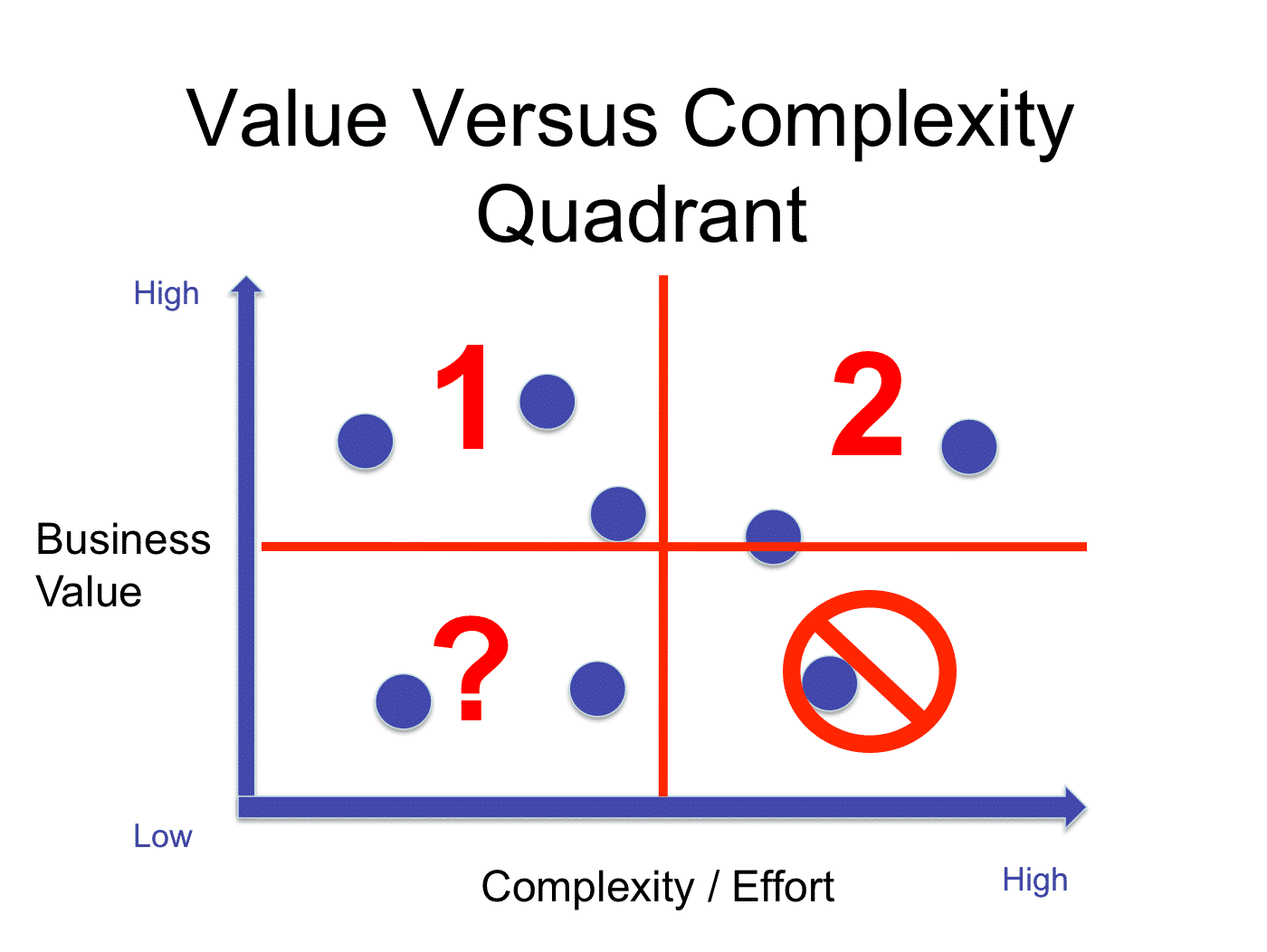 See this article from ProductPlan for a more detailed description of the most popular prioritization methods.

Note that using a mobile video editing SDK would cover many features at once with almost no effort. Depending on your situation, this could be a much cheaper option too.

Before you launch your mobile video editing app, it is strongly recommended to conduct user acceptance testing (UAT). The goal is to see how your video filter editor works in real-life scenarios with real users.

There are four steps to this:

UAT needs to be performed by the people from your target audience, who aren’t familiar with the app. For example, if your app targets teenagers who want to make YouTube videos on the go, find a way to attract them as beta testers to get the best results.

Now that your app is ready, you can launch it.

Uploading the app is relatively straightforward. App store optimization (ASO), however, is a bit more complicated.

Knowing how to use ASO is a must if you want to make your video editing app successful, as 40% of apps are discovered through the stores. In principle, it is very similar to search engine optimization.

This is what’s most important: 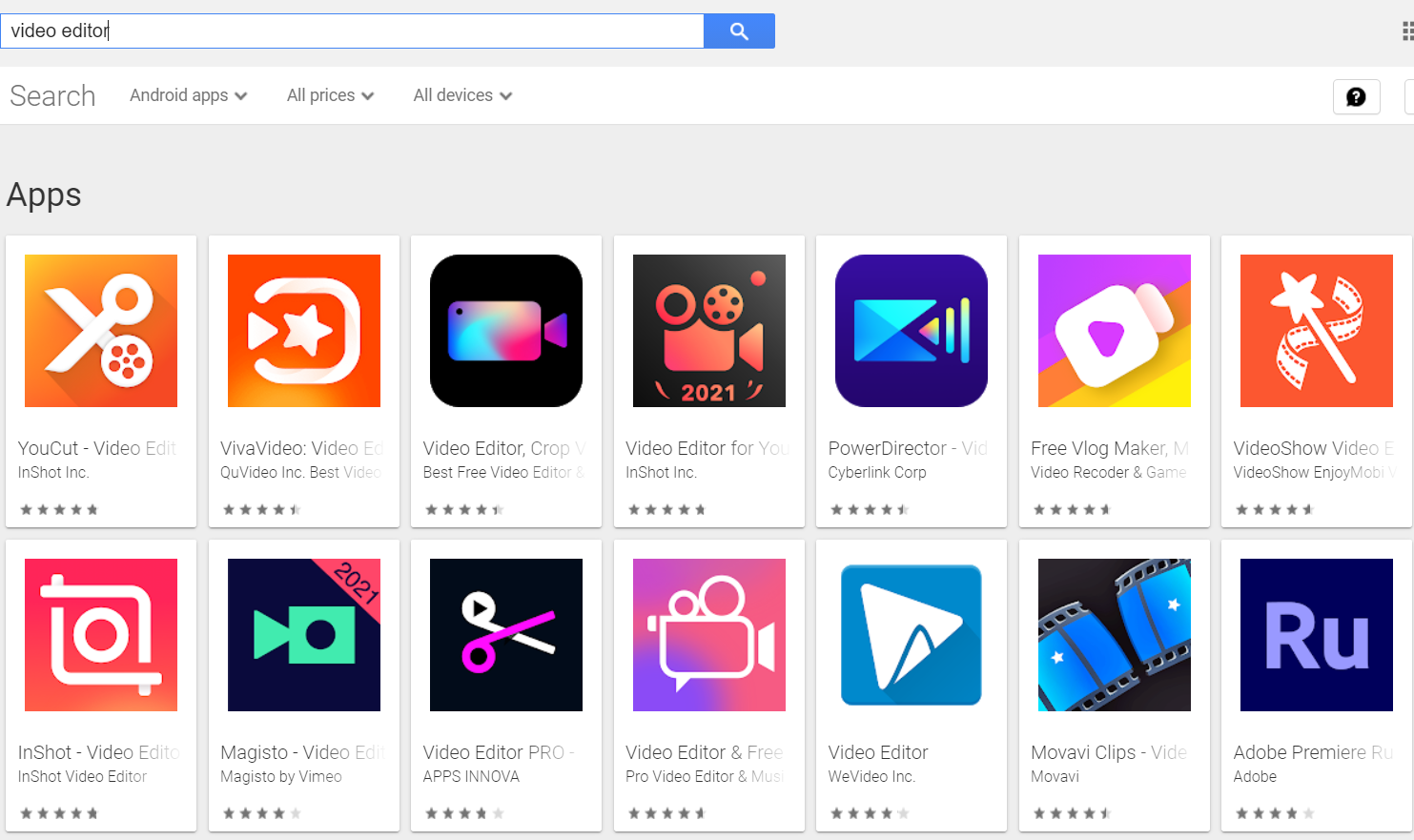 All the highest-ranked video editing apps have “video editor” in the title.

These two parameters are easy to change, so feel free to experiment with them.

Other factors that affect your rankings are the total number of downloads and the reviews your app gets. You don’t have direct control over them, although there are ways to incentivize users to leave positive feedback.

Developing a mobile video editor isn’t easy. The process can be as unique as the app’s concept and business model. However, we covered the main things you need to know to achieve success and avoid the common mistakes both during the development process and when launching your product. And if you want to speed up your work and get many cool features quickly, feel free to try out our AI video editor SDK.