React Native apps can boast of preserving the user interface and the typical platform behavior they run on.

And for video content, the framework offers the blazing-fast performance of 60 frames per second.

For this reason, we decided to create a post  that features: 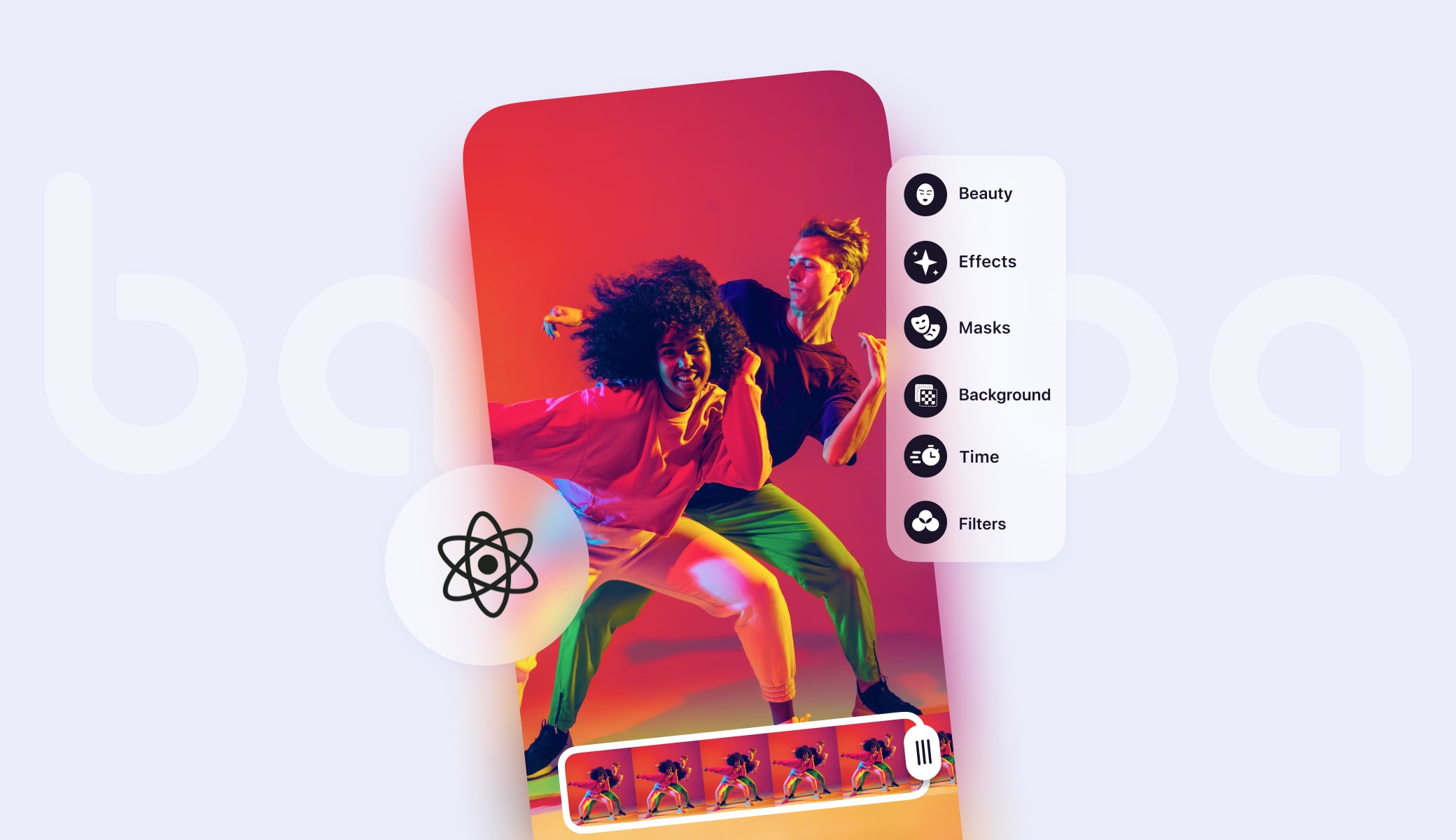 If you have video player features in your React Native app project, you can speed up the coding by using one of the libraries or SDKs available.

Here’s a list of the 12 most popular libraries that will have you covered in most use-cases.

Banuba Video Editor SDK is a toolkit for developers that offers all the necessary features for creating and sharing videos, animated clips, and stories.

All the features come with React Native wrappers, so you’ll only need to write a couple of code lines to integrate the necessary functionality.

Banuba Video Editor SDK is well documented and has a sample project on Github you can explore before starting the free trial.

Being one of the best video players for React, it has dozens of properties and features. It offers local and remote file playback support, audio and text tracks selection, configurable rate, and, of course, iOS and Android platform support.

As the package doesn’t provide the inbuilt controls to play/pause the video, you’ll need to refer to the react-native-media-controls library.

Users say that React Native Video has excellent documentation and is easy to use and customize. The only drawback is it may have low performance when using multiple videos as Facebook feeds.

This package is easy to use for its installation process is mostly automatic. It offers standard video player features and can boast of having a picture in picture mode, background audio sessions support, and casting.

It also allows you to customize the style and look of your player, change the icon color, etc.

React Native JW media player package is quite popular and receives over 450 downloads a week.

This react native video player example provides a fully customizable functionality with excellent documentation, including common use cases and how to implement them.

Unlike React Native Video, this package has two control slots displayed respectively on different parts of the parent container: play/pause/restart controls, progress bar, and the bottom controls with the video running time. It also has the loading function, which triggers during network issues.

VLC media player library is a flexible option supporting all network streams, including RTSP, RTP, HLS, MMS, and RTMP. What’s more, it supports files in almost any existing format (even the exotic ones like MKV).

The package comes with a sample React Native project you can check before integrating the library into your app.

In addition to basic features, it allows you to choose a video cover, apply video settings like speed, sound volume, and quality, change video style, etc. You’re welcome to check out this demo project to see it in action.

As the name suggests, this library can deliver many processing options like trimming, editing, "boomerang," and reverse video creation.

Like the others, it works on both platforms, but on Android, it also allows you to compress the video.

Though the library has a standalone API and a sustainable community of contributors, it hasn't seen any new versions released to npm in the past 12 months.

Unlike the others, React Native Advanced video player uses native brightness and volume controls and allows playing videos directly from a link or local storage.

What’s more, the library supports RTMP & HLS live streaming. You’ll also find styling options for the player container and a custom color picker for the seek bar among its props.

The library has sustainable maintenance and no security issues based on the Snyk security intelligence research platform.

Expo-av is a universal module for media playbacks. It’s very flexible, easy to use, and has many props to build a custom video player.

This React video library package boasts a lot of configuration and styling options, very detailed documentation, and multiple tutorials on the web. For instance, you can check out and play around with their sample on Snack.

Expo-av has a vibrant community of more than one hundred open-source maintainers and demonstrates a positive version release cadence with at least one new version released in the past three months.

This React Native video player example is a decent library offering a basic feature set and props for video playback. It’s pretty easy to work with and supports primary media forms like photos, videos, and music.

The package allows you to customize your player's style, including video wrappers, icons, and controls.

The current version still lacks loader and volume control, but it has a supportive community, so they will likely develop these features soon.

The library receives a total of 4,236 downloads a week and demonstrates a positive version release cadence.

IMG.ly offers a powerful VE.SDK which is heavily packed with features.

The SDK’s strong side is video editing. It allows you to easily play with composition, focus, frames, filters, and overlays.

Since the module uses custom native libraries, you can only use it in the Expo Go application.

But don’t worry. VE.SDK has a step-by-step integration guide that also shows in detail advanced SDK features, such as serializing and reusing previously applied editing operations.

This React Native video player supports both Android and iOS platforms. It provides you with a default set of controls, enabling you to play, pause, seek, or display current playback and buffer progress.

So if you’re looking for a pretty simple solution, this React Native media kit might work. But note that the package hasn't received any updates for the last six years. 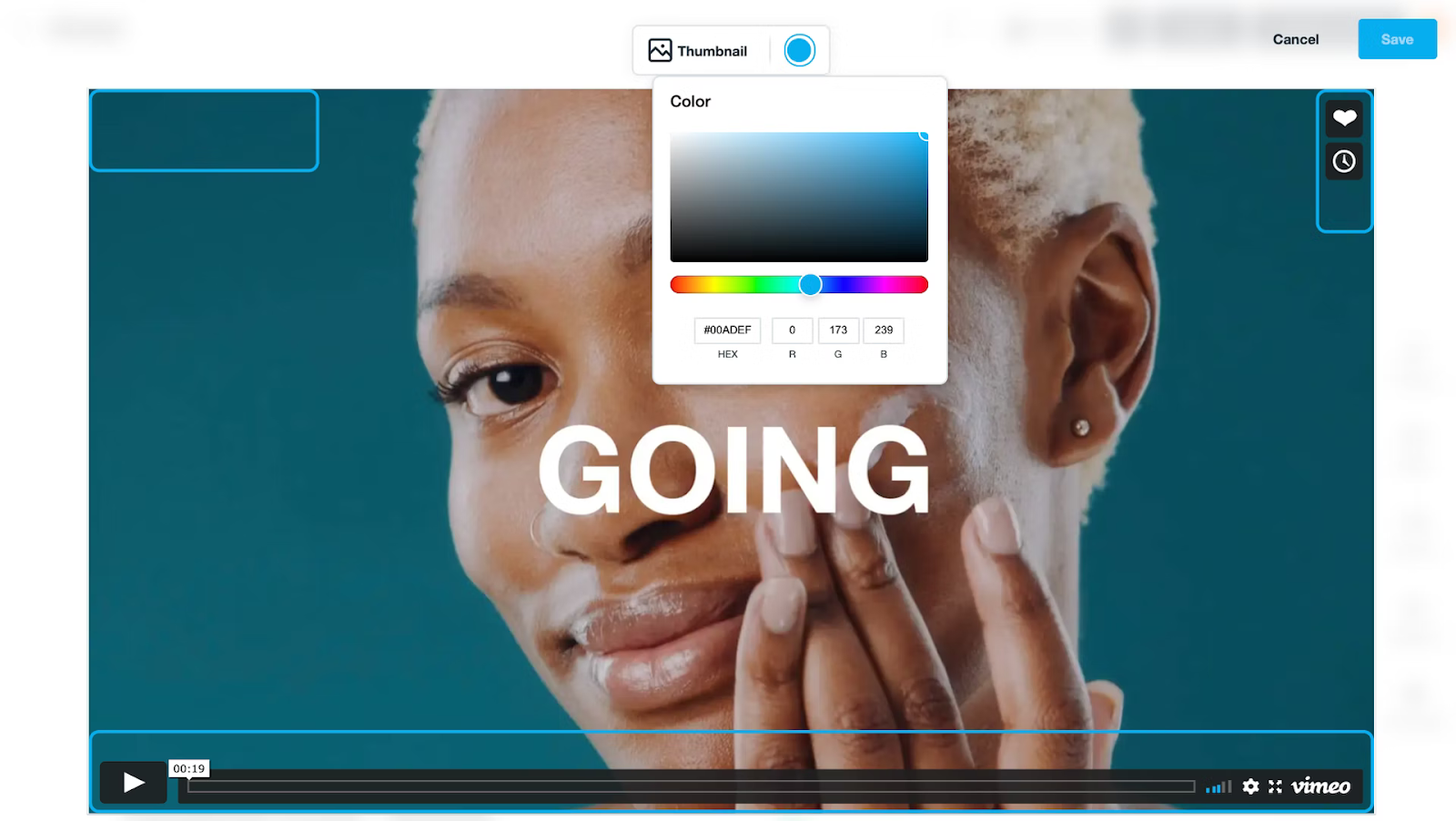 Some React Native video player libraries are relatively slim and provide only a few basic features like video recording and viewing. Others may blow your mind with AI-powered video editing and a comprehensive feature set. In a nutshell, here’s what a video player library can have under the hood. 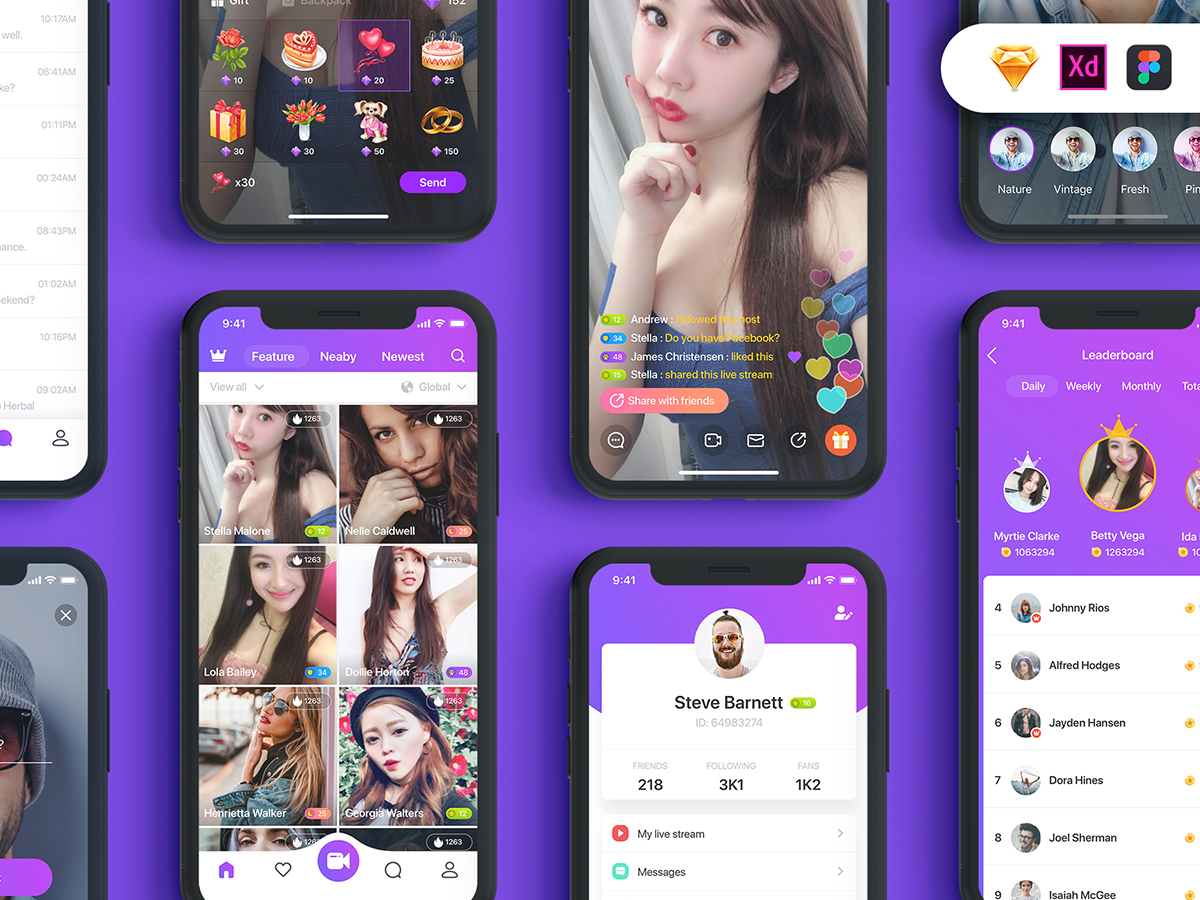 Today, video has become one of the most consumed content formats offering entertainment, communication, and collaboration. Typical applications of video player libraries include: 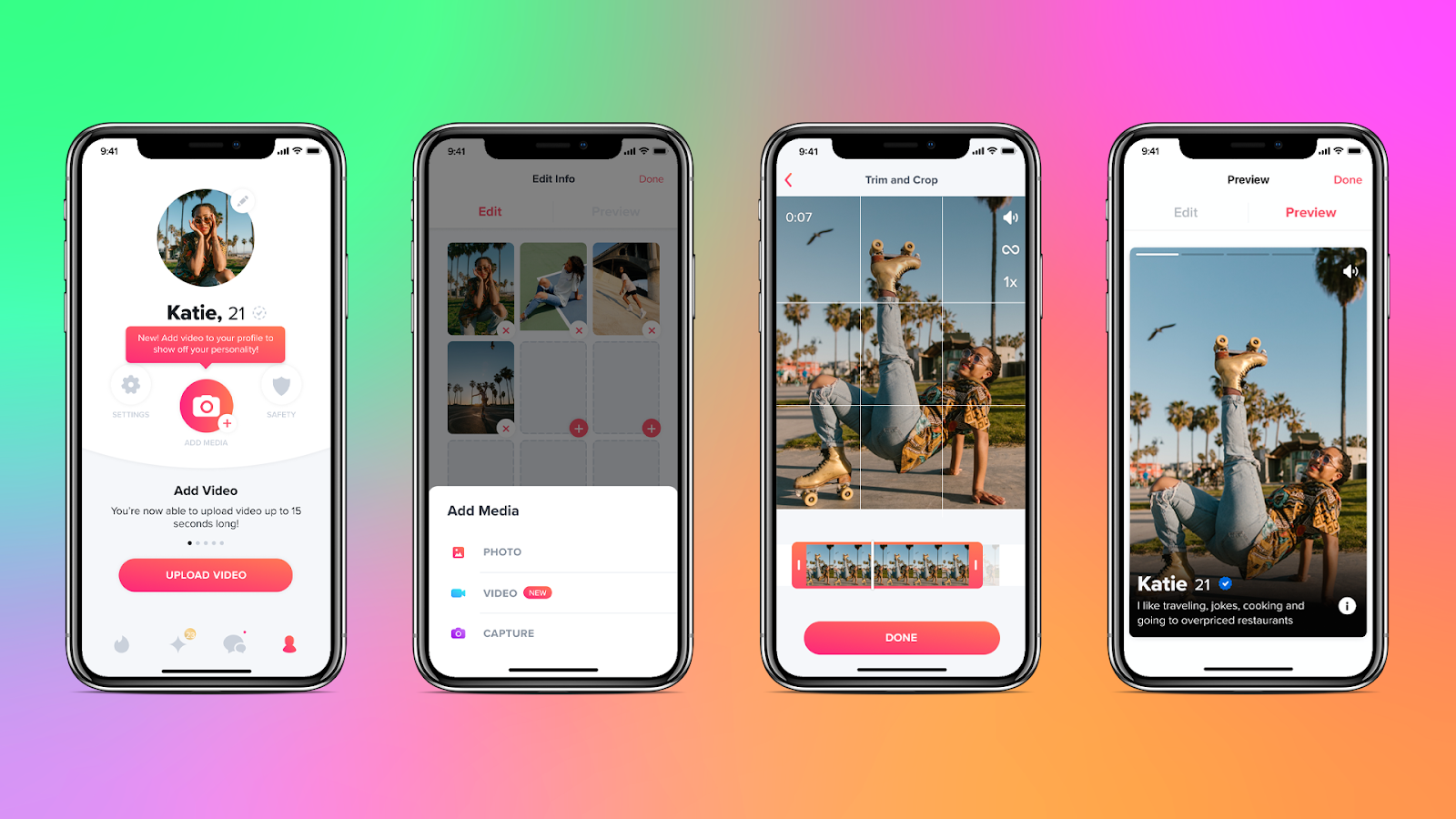 But of course, the use of video libraries for React Native apps isn’t limited to these use cases only.

If you want to try out more of them, drop Banuba a line, and we’ll hook you up with our SDKs and other useful resources.

Libraries simplify the development of complicated features since you’re reusing the code provided in them.

We can break down this advantage into multiple benefits of using libraries:

But nothing is perfect, and software libraries have their drawbacks too:

On top of that, there’s always a question of whether to go with proprietary or open-source packages. The answer: it depends on your apps’ features, budget, and usage.

In some cases, basic video player functionality will be enough, while in others, you may need a bunch of advanced features to stand out from the crowd.

React Native video player libraries have the power to save days or even weeks of researching, coding, and catching bugs. But, you need to carefully check the tool you’re considering, its documentation, and read reviews before interacting with it.

To help you with that, we’ve listed the most popular React Native libraries you can use in your project.

And if you need an extended feature set and reliable performance, contact us, and start your free trial with Banuba Video Editor SDK.