Pay-to-earn model and cryptocurrencies complement each other well. When combined with diverse gameplay options, the product’s success chances rise further.

But the most advanced games of this kind leverage another cutting-edge tech to attract and retain players - augmented reality which is among the most effective ones.

Naughty Cult is a mobile gaming startup based in Bulgaria. Its management had the idea of creating a play-to-earn game with hype at its core - Clash of Streamers. It was to include a lot of cutting-edge technologies to make it more diverse and thus attract more players.

One of such technologies had to be AR face filters. The developers wanted people to turn themselves into their characters with selfies and filters overlaid on them. The idea could have a massive positive impact on user experience and engagement.

Banuba was the best technology vendor for this case. 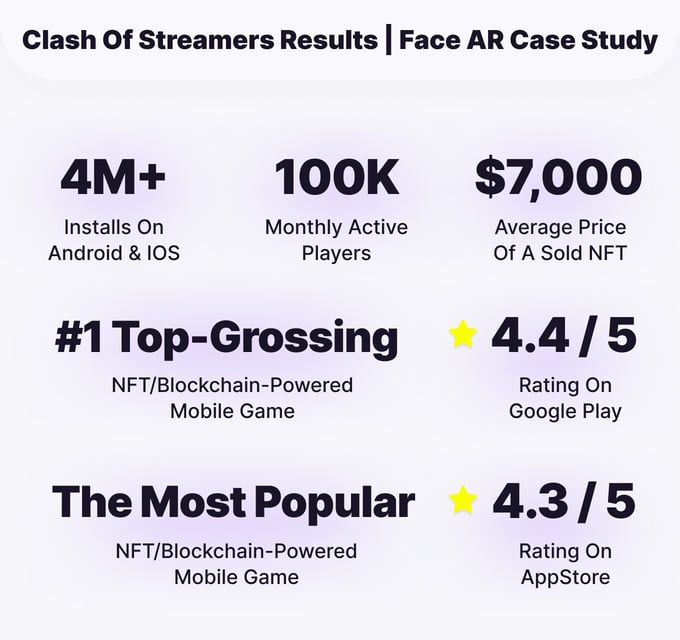 One of the main features of Clash of Streamers is the ability for players to take a selfie and turn themselves into heroes. To build upon these features, they wanted to include face filters so players can further customize their in-game characters. However, these effects needed to match the overall style/theme of the game. So, the company decided on using Banuba since the provided AR filters were the most fitting ones.

Another important issue was background separation. Only the player’s face should have been attached to the character model, and background clutter was excessive. There were few products that could’ve provided this feature with the necessary precision.

Clash of Streamers Features: NFTs and Beyond

Clash of Streamers is a mobile hero-collector RPG that lets users progress through a range of minigames.

Players can create a team out of heroes (summoning “Kappas”, “Trihards” and “Pogchamps”) to battle AI opponents as well as other players. Many of these heroes use the player’s face and AR filters on them.

How AR masks are used in-game

The Geopet Go feature allows players to catch AR creatures in the physical world, similar to Pokemon Go. These pets can then help you in battle, such as in the campaign tower and they can even be turned into NFTs.

A classic puzzle is included in the larger-scale game. Switch gears and play some match-3 for a more relaxing experience while still making progress in the overall game.

Various slot machines let players win in-game rewards. However, the game has innovative anti-gambling mechanisms that go far beyond simply disclosing the odds of winning certain items: at any point, players can switch into a “Future Mode” that allows them to fast-forward and see all the rewards they will deterministically obtain if they were to continue playing and spending their in-game currencies.

Clash of Streamers allows players to earn by creating non-fungible tokens (NFTs) from within the game. Both heroes and pets can be collected, customized, and upgraded within the game but can also eventually be exported to the Polygon blockchain where the player truly owns them in the form of NFTs. Players are then able to share or even sell these tokens on third-party marketplaces such as OpenSea, where Clash of Streamers NFTs have sold for on average $7000 worth of Ethereum.

At the core, the game is actually charity-driven. Players can accumulate in-game currency called Crypton, which yields additional benefits when choosing to donate it to charity, resulting in more funds being allocated to the Giving Works NGO.

Players can stream their games live via Twitch, Facebook, or YouTube. They can also use AR masks to modify how they look on camera. Each player is a streamer in such a way, hence the game’s name.

Clash of Streamers turned out to be a massive success, with over 4 million installs across iOS and Android in less than a year since it launched. Beyond that, it is also the #1 top-grossing and the most popular NFT or blockchain-integrated game on the Android Play Store and iOS App Store.

There were several reasons why Naughty Cult chose Banuba as its AR solutions company:

“By integrating Banuba’s AR filters in Clash of Streamers, we were able to add an innovative twist to the mobile RPG ‘hero collector’ formula and let players create heroes based on their own likeness. On top of that, the fact that players can then also turn these heroes into NFTs makes for a very unique experience.”